How Meditation and Yoga help me in Photography PART TWO

How Meditation and Yoga help me in Photography, PART TWO

This is a two parts series. Originally I wrote this article in German for the online photo magazine FOTOESPRESSO. Find the GERMAN VERSION here.

Noha, receptionist in a small hotel in Cairo, Egypt

In meditation and yoga you learn to get in touch with yourself better. Many exercises help to heighten the senses and you learn to really feel your own body – to accept oneself how one really is without judging. I must be able to feel myself in order to feel other people and be able to fully engage with them. That in turn is the prerequisite for taking strong, touching and intimate portraits. I need to be able to interpret facial expressions and body language, in some situations even very quickly, to be able to assess whether a stranger will allow me to photograph her/him on the street. This communication is possible completely without words when I am able to communicate with eyes, facial expression and body. I have to know myself well and understand how I appear to others. If I radiate calm, openness and warmth then this transmits to others whom I want to take pictures of, and creates a non-verbal connection that allows me to create an intimate portrait.

I photographed for a while long term residents of small backpacker hotels in Cairo. A receptionist, Noha helped me get in contact with them and we often had a lot of fun together. One sunny afternoon, I sat opposite her absorbed in thought at the reception, both peaceful and silent for quite some time. The warm afternoon sun wandered slowly around the corner and bathed Noha in her chair in a wonderful golden light. I had not planned to photograph her, but the moment was just perfect. I raised my camera and pressed the button. Noha stayed exactly as she was. Neither in her face nor in her body a muscle moved - she was completely relaxed and one with herself. We were together in complete peace and quietness.

You do not always have that much time. Often it has to happen quickly and it is precisely in such moments that it is essential to be able to stay calm and open. Equally as tranquillity is felt by those around us, so are our feelings of being hectic and nervous. In a reportage for GEO magazine about women and democracy in Tunisia we met a shepherd. We had maybe 15 minutes for an interview and photos if she was in agreement. We could of course not have known that before. During the interview, my inner eye ‘scanned’ the lighting conditions and worked out a number of possible images while I listened to the interview in order to be able ‘feel’ this woman. I could tell from her posture that she was of strong character who was proud of what she did. This had definitely to be expressed in my photos. In order to help strangers and also those familiar to me lose their self-consciousness in front of the camera, I have to take myself back and radiate this said calm. The less I gesticulate wildly and try to dominate the situation, the more the subject can increase her energy field and really be who she is. That is how this portrait of the herdswoman was created. I did not give any instructions, but just asked her to present herself how she wanted to be photographed by me and seen by others.

When I look up in the thesaurus 'present-minded', I get the following suggestions: thoughtful, resourceful, amicable, and responsive. These seem very appropriate characteristics for successful photography when the body is under some kind of duress such as in crisis situations, documenting sport or concerts, or even everyday events on the street. The body produces more adrenaline than in quiet moments, which can be lifesaving if we have to take flight. But it can be more of a hindrance if I want to create a picture, but get taken over by the rush and I am not capable of seeing through it. My first photography internship was in 1995 with a wonderful photographer in Dortmund. I was allowed to join the event in which the Colani Egg building was inaugurated, by the famous designer Luigi Colani. It was a large pod placed on top of the former winding tower of the coal mine Achenbach in Lünen-Brambauer, Germany. A helicopter was available for the accredited photographers to photograph the UFO shaped structure from air. For hours I envied the photographers who were on the list of those who were allowed to fly. So in an opportune moment I queued up and when it was my turn, I made known my carefully prepared explanation of why a certain director of one of the companies involved had neglected to include me on the list. "Mr XYZ (one of the directors of the involved companies) sends me, I am also supposed to take photos from the air but was forgotten to be put on the list." Before I knew it I was sitting in the helicopter with my heart fluttering insanely – I had flown only once before in my life in a plane.

Adrenalin whipped through my body. I photographed wildly and was actually pretty headless and did not manage from 36 shots to expose even one correctly. No! All too dark or way too bright. I was quick-witted enough to get myself into the helicopter, but then I did not have the nerves to concentrate on photographing. And that is exactly the kind of situation where some meditation training begins to assist us. You keep practicing to stay calm and unhurried, to let thoughts and feelings pass without holding onto them, or getting involved and tangled in them. If I had already known something about these techniques, I would have used one of the calming breathing practices of yoga as I stepped into the helicopter. With such a technique I am now able to calm down my central nervous system and bring the heartbeat back to normal and get a clearer head. 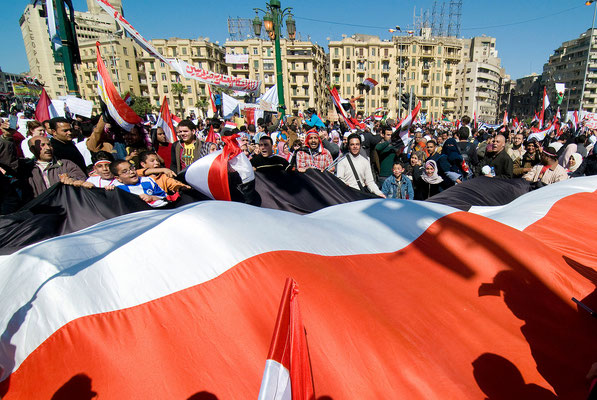 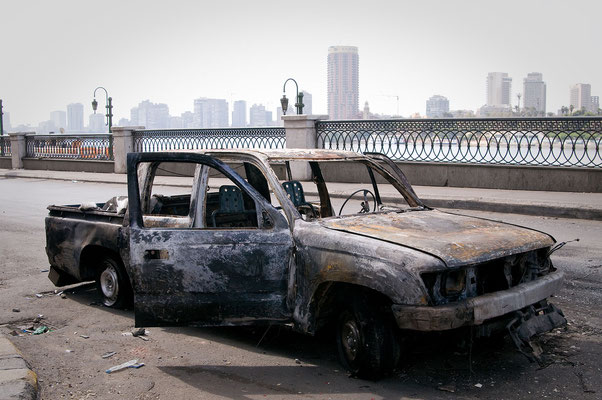 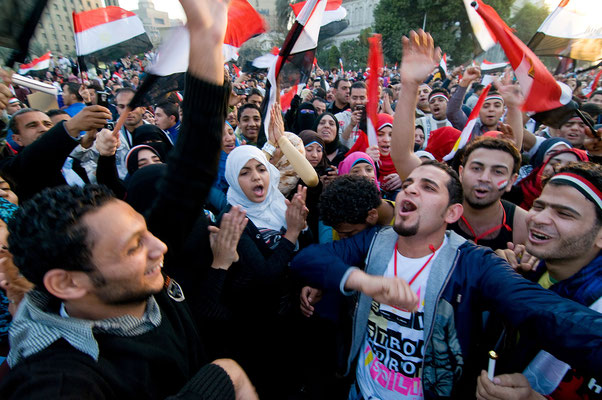 During the 2011 revolution in Egypt, I would get plenty of opportunity to put my meditation and yoga skills into action. I am not a crisis photographer at all, but a true revolution in my adopted home was one personal matter for me which I had to photograph. All my senses were on non-stop alert. While looking through the camera, my ears had to listen to conversations around me in order to catch possible warnings of trouble. At the same time, I had to be aware of sounds like shots farther away. My sixth sense had to pick up any onset of panic, as the threat of stampede was a greater danger than falling victim to any violence. And if danger threatened us, I had to try to stay clear headed, calm down my breath and control my fear. Not just for my own safety, but above all for my friends and acquaintances who demonstrated there. The mood on Tahrir Square would often change every half hour. Sudden attacks by the security forces or government-hired thugs, new barriers at exits which had been used by many to escape – cheers and euphoria. It was an absolute overdose for all the senses and I was very grateful that I had become proficient in techniques that helped me be able to calm myself.

In May and October 2020 I offer the next workshops in Seville, Spain, where we will bring photography and meditation and yoga together. If you love photography, yoga and creativity and you would like to spend five intensive days with like-minded women in one of Europe's most beautiful cities then this workshop is excatly for you.